Kathy Darling from Health and Human Services Agency, and by the time she ultimately retired from the Department of State Hospitals back in 2017, she was the Chief of Human Resources. Kathy loved her nearly 40-year career with the State, so much so, it took her three times to retire officially. Every time she got to the “finish line,” she found a way to extend so she didn’t have to say goodbye to her amazing staff. However, what finally made her make the very tough decision and retire once and for all was when her now late husband became sick. 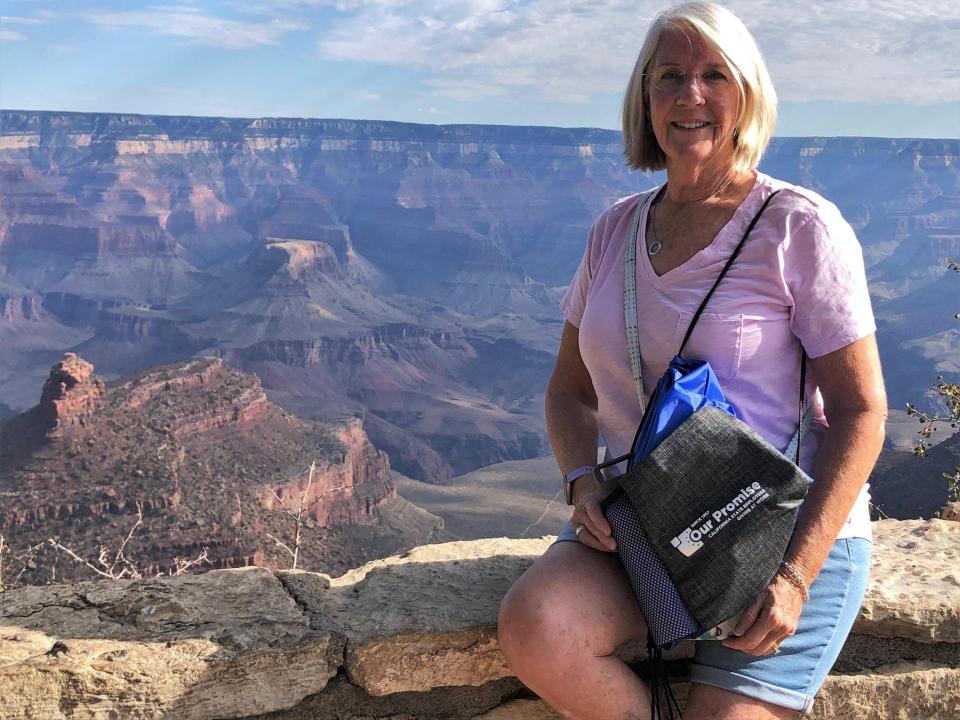 Lucky for us, she hasn’t stepped away from the State entirely. She now works as a retired annuitant and chooses to use that time to work on the Our Promise Campaign as a Leaders United Executive for her third year. Because in her words, “who wouldn’t?!” Everywhere she goes she brings warmth and brilliance that shines to everyone she comes in contact with and is always full of smiles.

We asked to sit down with Kathy to talk about her very interesting experiences and perspective on life after retirement. We talked about everything to do with being a retiree, including all of the curveballs life throws at us, and the endless possibilities that open up when you say yes.

Here is our full conversation:

How did you get involved with the Our Promise Campaign?

Kathy:  Actually, I got a call from the Health and Human Services, and at the time, I had stopped physically working, but I was still getting paid because I had so many leave credits. It so happened that they contacted me the week my husband passed away. At first, I thought “how can I do that or anything at all?” but honestly, the job wasn’t going to start for another five weeks and as I thought about it, I don’t know what to do with myself. All of a sudden, our lives have changed. Our little retirement plans were gone and I don’t know what to do. I felt like it would be a smart thing to do to help me to back out there and get back on my feet to help find my way. That’s what made me do it.

Wow, that must have been really impactful.

I remember a few years ago at the Our Promise Thank You Breakfast in your speech, you mentioned that it was actually your husband who told you to keep on living. There was a piece there that really hit home for all of us, was that he asked for you to “say yes to everything.”

K: Yes! You’re right, that was ultimately what made me say yes [to joining the Campaign]. He talked to me before he passed away and told me that he wanted me to stay busy and do things; not stay at home and mope around the house. He said “when somebody calls you and asks you to do something, I want you to say ‘yes’ even if you don’t feel like it. You need to do it. You need to go out there and keep going.” He knew me and I was going to look for that corner in the house and just sit there. It has really made a huge difference to me, I really do say yes to everything now because, why not? Why not do something? Even when I don’t want to, every time I come home I say “I am so glad I did that!” I surprise myself sometimes that I can have fun. If you don’t go out and try it and say yes, I think you just hold yourself back that way. That’s what my husband wanted for me so I am doing what he asked for me.

That is really quite a powerful statement to hear from somebody you love so much. I think that is quite a transferable lesson to take with you in all of those major transition moments in your life; whether that’s a loved one passing or retiring from a long career. You had a lot of those major life changes in just a short amount of time. The fact that you didn’t stop, is really what is so inspirational.

K: To this day it is still hard, your life changes just so completely. We were together for 36 years. That was such a long time. While it has always been my biggest fear, you don’t want to lose your mate, and I had seen other people who were widowed at some point – it was scary to me. You also don’t think that it’s going to happen to you. You expect that at a certain age, that we are all going to wave goodbye, but you don’t expect that to happen earlier like that.

So that also got you started working with the Yolo Hospice (OP CODE 3172), right?

And that’s one of the nonprofits you choose to give to through the campaign?

K: Yes, that is my nonprofit, the one that I give to.

That’s something that you have said before, “you never know when you need a nonprofit until you do.”

K: That’s right, until you do. Without them, I wouldn’t have been able to take my husband home. He had been in the hospital for two months and it was pretty horrible. The fact that they were there and they gave me an avenue to bring him home. While he only lived three and a half weeks longer, the beauty of it was that her, my husband, my son and I were able to be home together. We were able to have somewhat of a normal routine, in not a normal situation. His family was able to come and see him all the time. Dan [her husband], had a ton of friends and everyone made arrangements to see him over and over again. He had a beautiful last few weeks. When he was treated at the hospital, he couldn’t have that kind of visitors. He has an older father who couldn’t make the trip to UCSF so the move home made all the difference in the world that they were there and offered that service.

It is so touching to hear that your experience with [the Yolo Hospice] allows you to pass that on to somebody else who will need that service and will have those beautiful last couple of weeks with their loved ones.

K: Absolutely, it was amazing. So I am a Leadership Giver with the Campaign and I give to Yolo Hospice, but my husband’s friends also wanted to put together a golf tournament in his honor with all of the proceeds going to Yolo Hospice. They came to me about a month or so after my husband passed away and I thought “I think that’s a great idea, let’s do it!” and so we did it! This is now this is the third golf tournament we wrapped up [in October] and we have been able to give a significant donation to Yolo Hospice because of it. Each year, it has been a little more and a little more. It just makes me feel great and it honors my husband. It’s a beautiful thing.

I want to talk a little about your life now that you are three years into retirement. Just knowing you and hearing about your stories, you have done a lot, what else are you able to use this time for?

K: Well, I am doing a lot of construction on my house. My husband and I wanted to make a lot of improvements to the house. We have a 1950s style house with the original 1950s bathroom with the pink tile, and a really skinny porch and a driveway with a million cracks in it. And so we had planned on fixing all of those different things. Before my husband passed away, he took me, my son and daughter and law out to the driveway and told us that he still wanted us to do all of the things we were going to do, don’t stop. Decide what you want to do and do it. At the time, I didn’t realize how important all of those little instructions were but it made all of the difference in the world and now I have the confidence to make those changes because he asked me to. It’s my assignment, it’s easy to do it that way.

I have also been able to travel a little. I went to Europe for the first time last October. As only the second time to ever use my passport. The first time we went to Mexico for a family friend’s wedding in Cancun. And that was the first and last time I used my passport.

What inspired you to take the leap?

K. It was kind of interesting, I love quilting and I have a friend in my quilt group and she entered a nationwide challenge where you have to make a quilt that depicted a Van Gogh painting and she wound up being one of 120 people nationwide who won this challenge. So all of the quilts went on tour around the nation then over to Europe. She asked me and two others to go and I thought, “well, why not?”

How long did you go for?

K. Two weeks, it was pretty cool. My favorite place was Amsterdam. We went to Amsterdam, Belgium, then Paris. It was a bus tour so we saw a lot of countryside along the way. And I thought that Paris would be my favorite since everyone always talks about Paris, but it was actually Amsterdam.

So what’s next? What are you looking forward to?

K: I want to Alaska. We were going to go to Alaska and we didn’t get to go, so I am taking care of our little bucket list. I am looking to go next summer with friends. I just went to the Grand Canyon last month and that was on our little bucket list. It came up unexpectedly. A friend wanted to take a trip and she said, “why not Arizona?” I had never been there, so let’s go! We actually spent the night on the Southern Rim and it was amazing!

What else should we know about you? What is it that completes Kathy Darling?

K: The love of family and friends is what keeps me going all of the time. Some days are harder than others, but some days are easier than others. I try to find something in each day that makes me happy that allows me to keep on going. I just think that [being a Leaders United Executive] has been really been fantastic for me, it was my third time doing it now and I just love it.

And we love having you! It has been really fun because you have been able to step into that leadership role again, one that you were very used to but in kind of a different way.

K: Yea, it is in a different way. I spent 34 out of my 39 years of State employment in Human Resources. So that was a lifetime of the same discipline so it was nice to do something a little different.

Do you have any advice for anyone who is looking towards retirement but can’t seem to take those first or second steps?

K: I think it’s the right thing to do. You earn your retirement, you work your whole career and it’s time to step out and do things you never had the opportunity to do before. It’s a good thing. I would say they should do it. And also, consider coming here and working with the campaign as a retired annuitant. It’s worth it and it’s wonderful.