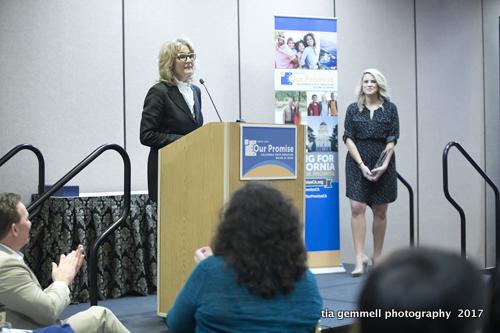 Secretary Marybel Batjer, Government Operations Agency, was awarded the Augustus Freeman Hawkins Award of Distinguished Merit in Community Service at the Our Promise Thank You Breakfast event on March 1, 2017.

The award was presented by Tabitha Angel, Director of Our Promise. The award celebrates the vision of the man who created Our Promise, Augustus Freeman Hawkins.

Secretary Batjer was honored for leading her agency in innovation, allowing strong support and recruitment of campaign chairs and key connectors and providing educational opportunities for employees to learn more about the needs of communities statewide.

As a result of her creative leadership, all of her agency departments led note-worthy campaigns. Each department hosted successful special events and well-attended kick-offs.

There is no surprise that with all of Secretary Batjer’s tremendous efforts, the campaign raised $545,000 with more than 2,900 employees participating.

The Augustus Freeman Hawkins Award is named after Assemblymember Augustus Freeman who authored Assembly Bill 990, which became State Law in 1957 and established what Our Promise was previously named, the California State Employees Charitable Campaign.

To see all 2016 award winners and photos from the 2016 Our Promise Thank You Breakfast, click here.